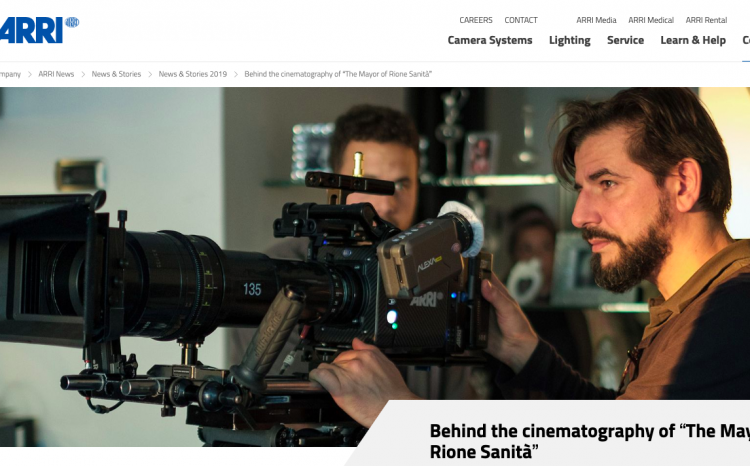 The Italian crime drama “The Mayor of Rione Sanità” (original title: “Il sindaco del Rione Sanità”) directed by Mario Martone brings from a stage drama to the big screen. The play of the same name, written by Eduardo de Filippo and first performed in 1960, was later adapted for the stage, notably in 2017 by the NEST Theater Company of Naples and was directed by the same Mario Martone. Having had its world premiere at the 76th Venice International Film Festival in the Main Competition, this feature was awarded with the collateral prize “Leoncino D’Oro” (Agiscuola, UNICEF).

Filmed in a villa at the foot of Mount Vesuvius in Naples in only four weeks, the picture tells the story of Antonio Barracano, well-known as “Mayor,” a man of honor who manages to resolve the justice disputes that arise within the neighborhood community and in doing so, prevents great violence.

ARRI had the chance to sit down with DP Ferran Paredes Rubio who used ALEXA XT Plus and ALEXA Mini cameras (with Open Gate ARRIRAW 2,39:1 recording format) and lighting equipment by ARRI on the film. He was able to elaborate on the cinematography behind the feature and let us in on some candid insights.

“For so many reasons I choose ALEXA Mini for this project: Its naturalness in terms of the color rendering of skin tones and in the usage of mixed lights I intended to create. Its high exposure latitude helped a lot during the shooting of various scenes in which the indoor and outdoor spaces were combined in a tracking shot. In addition, its reduced dimensions were essential as they allowed us to use stabilization systems,” said Ferran Paredes Rubio.

Finding a proper look was among the challenges he faced during the shooting: “The biggest challenge was to find a cinematographic look for a project that lies between a film and a theatrical piece. The scenes contained many actors, sometimes more than ten. It is never easy to create interesting shots with so many actors in such small environments. The characters used to come in and out continuously and this was part of the second challenge which was to establish a constant relationship between these limited spaces and the outdoors.”

The story takes place over the course of a whole day, starting in the middle of the night and ending after dinner, in which the sun had to complete its entire arch from dawn to dusk. The main locations centered around a white villa at the foot of the Vesuvius volcano and a completely black flat in the Rione Sanità neighborhood. “We wanted to keep this division between the narrative transitions, between black and white, light and its stark absence,” explained the cinematographer, and added: “We hoped that all these narrative elements could help us to adapt this beautiful play from Eduardo De Filippo.”

Despite the homogeneity of the environments, in cooperation with production designer Carmine Guarino, Ferran Paredes Rubio tried to give a depth to the images through the existing furniture that could create a play of shadows with a variety of textures. He added suspended furnishings to the walls to create shadows and movement, otherwise the walls would have just remained black or white. “The decision to use anamorphic lenses happened straight away: I wanted to create an intangible relationship between the characters and the space and have a shallow depth of field. I was often ‘forced’ to use wide-angle lenses that could turn the environment into a ‘non-place.’ Something like a realistic scene but separated from the characters and somehow isolated in the light of reason (the white villa) and in the shadow of death (black apartment).

On the usage of ALEXA, Ferran Paredes Rubio reported that the 4/3 sensor was the crucial point for the related usage of anamorphic lenses without which he couldn’t have conceived the photography of this film.
Ferran Paredes Rubio also relied on ARRI lighting for his project, using both LED and Tungsten fixtures. “I believe that each atmosphere needs appropriate lighting fixtures. SkyPanel S30 and S60 were very useful in small environments for their versatility and easy management on location.” In some spaces he used Tungsten lights, such as ARRI 650, ST1, ST2, and ST5, while in others M-Series Daylight lampheads were chosen.

“Personally, I consider Tungsten light to be the richest with a more natural rendering for many reasons. LED, especially SkyPanels, are becoming an essential part for my lighting setup, allowing me to have more freedom in color and light intensity. Moreover, the change of effects even during the shooting of a scene make them super practical and allow me to be creative!”